I’m pleased to announce my new mystery series featuring Wren Fontaine, an architect who specializes in restoring historic homes. In the first book, The Greenleaf Murders, Wren gets her dream job of working on one of New York’s finest Gilded Age mansions. More than a century ago, the house was the scene of a murder that was never solved, and now someone is killing again, in the same way. Wren can’t even trust her secretive client, and she finds herself distracted by an exciting new girlfriend. She must risk her career–and her life–to solve multiple mysteries and save New York’s most glorious residence. Welcome to Greenleaf House, where “skeleton in the closet” is not just a metaphor.

From the Historical Novel Society on The Body in the Ballroom: “snappy dialogue…mystery fans should enjoy how [Koreto] brings turn-of-the-last-century America and the irrepressible Alice Roosevelt to life and look forward to her next adventure.”

From Library Journal on Death at the Emerald: “Lady Frances’s engaging third case is a good bet for fans of Rhys Bowen and Kate Saunders and for lovers of Downton Abbey.”

From Bookreporter on Alice and the Assassin: “The unlikely friendship between the Montana cowboy-turned-Rough Rider-turned-bodyguard and the beautiful, strong-willed teenager with resources and grit turns out to be a nice part of the story. St. Clair seems mystified at times with Alice, and she with him, and the friendship they establish is both lopsided and real.”

From Kirkus Reviews on Death at the Emerald: “Koreto’s third period mystery, beautifully appointed and written with measured authority, reads uncannily like a reprinting of an authentic novel from the early 20th century.”

From the New York Journal of Books on Alice and the Assassin: “Koreto has written a delightful book, full of the contrasts of Alice’s audacity with her social status. By all accounts, Alice Roosevelt’s life was lived as fully and flamboyantly as she could manage. The fictionalized Alice is an entertaining creation and one of whom the actual Alice probably would’ve approved.”

Signing books at the wonderful Mysterious Bookshop in New York 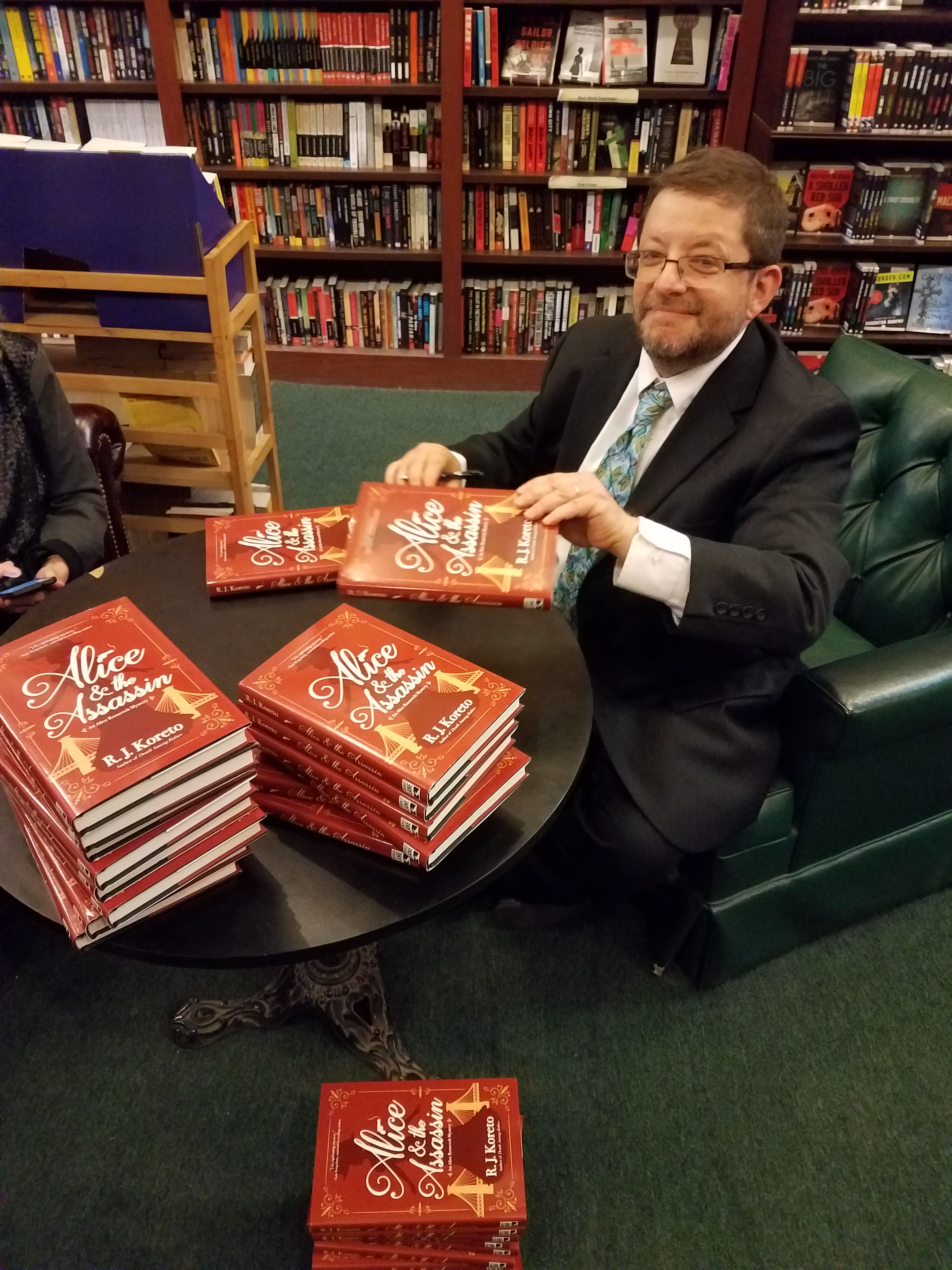 Welcome to the turn-of-the-century, where in New York and London the world is rapidly changing: horses are giving way to motorcars, electricity is replacing gaslight, class boundaries are blurring, and women are demanding the vote.

But for now, the old families still hold sway in the great cities, and few see any change to their lives in the foreseeable future. As the Countess of Grantham tells her daughter in Downton Abbey, “Yes the world is changing. But not that much. And not fast enough for you.”

R.J. Koreto explores this world in two series, below. Click on the above images for more on the books.

In England, Lady Frances Ffolkes, daughter of the Marquess of Seaforth, returns from America with her degree from Vassar College, determined to get the vote for women and support a range of progressive causes. She shocks her family by living on her own, and when mysteries come her way, she fearlessly investigates, from London’s dangerous East End to the drawing rooms of the nobility. She’s ably assisted by her loyal maid, June Mallow, who sees her mistress is well dressed–and defends her while brandishing a rolling pin. And despite her busy schedule, Lady Frances also finds time for romance.

In New York, Alice Roosevelt, the spirited and wildly unconventional daughter of President Theodore Roosevelt, is trying to find her place in the world. When she catches a shadowy company trying to spy on her, she turns detective and enters a world of murder and conspiracy among the city’s lively ethnic communities. Alice forms a reluctant partnership with her Secret Service bodyguard, Joseph St. Clair, a former Western lawman and veteran of the Rough Riders. They learn to work together, as St. Clair tries to come to terms with his hard and violent past, and Alice struggles with her growing feelings for him.

ABOUT ALICE ROOSEVELT
"Alice And The Assassin is a great debut in a new series for fans of historical mystery. I loved spending time with feisty Alice Roosevelt in her role as a sleuth, and in the company of her sharp young Secret Service Agent, Mr. St. Clair. It’s a delightful read and left me wanting more."
--Linda Fairstein, New York Times bestselling author of the Alexandra Cooper crime novels

"R.J. Koreto gives us a fascinating glimpse into the lives of the Roosevelts in this intriguing whodunit. Alice is a feisty, independent woman of her time, and her bodyguard, Mr. St. Clair, is a perfect foil with his calm demeanor and dry humor. Smooth writing and an eye for detail adds to this captivating mystery."
--Kate Kingsbury, national bestselling author of the Pennyfoot Hotel Mysteries

ABOUT LADY FRANCES
“An intelligent and engrossing historical novel with an wonderfully independent heroine (of the right social class!) and her enterprising maid. But it is by no means a cozy story, delving into the grim realities of war.”
--Rhys Bowen, New York Times bestselling author of the Molly Murphy and Royal Spyness mysteries

"R. J. Koreto introduces a delightful new heroine with Lady Frances Ffolkes. Everyone underestimates Lady Frances and usually to their dismay. You’ll love reading about her adventures as she takes time out from her efforts in the Women’s Suffrage movement to solve the murder of an old friend."
--Victoria Thompson, bestselling author of Murder in Morningside Heights

"Spirited and tenacious, Lady Frances Ffolkes is a force to be reckoned with as she endeavors, undaunted by all obstacles, to find a missing manuscript and solve the murder of a family friend in this charming Edwardian-era mystery. With Death on the Sapphire, R.J. Koreto has given us a winning heroine and a thoroughly delightful read."
--Ashley Weaver, author of the Amory Ames Mysteries

"A memorable heroine--a young suffragette--and her equally dauntless maid engage in a battle of wits against the Establishment that is ready to kill to keep the truth buried. An enjoyable read."
--Carola Dunn, author of the Daisy Dalrymple mysteries